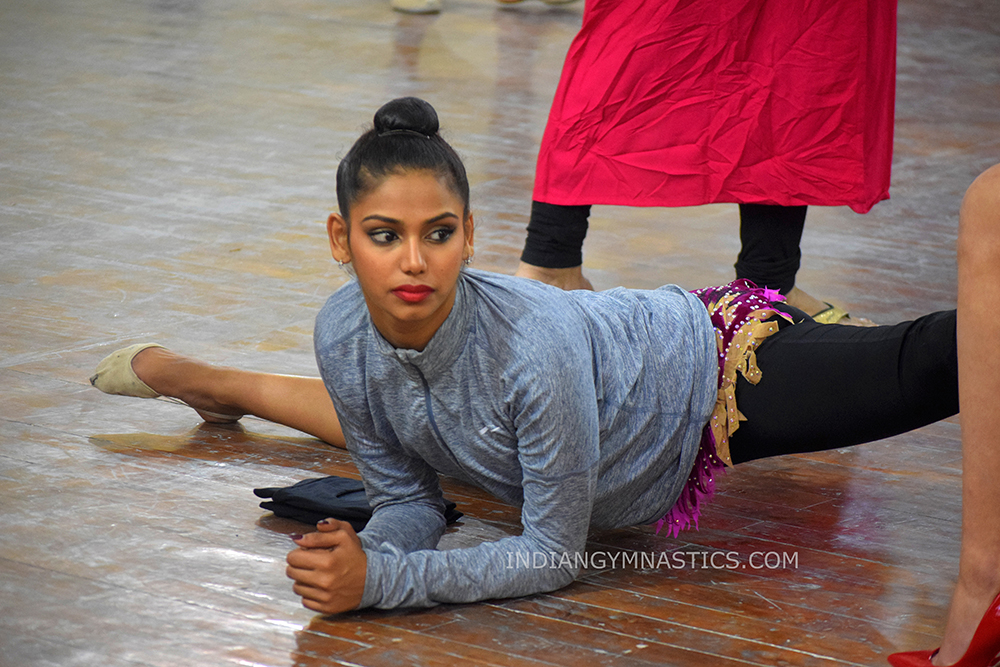 Meghana is the newest rising star of Indian Rhythmic Gymnastics. She has participated in various FIG Invitational International Competitions and Asian championships. She won the people’s choice award at the 8th Senior Rhythmic Gymnastics Asian Championships held at Tashkent, Uzbekistan from 8th to 10th May 2016.
Meghana tops the Commonwealth games trials held at Indira Gandhi Stadium, Delhi from 12 to 14th february with a massive 7 points win over the runner-up. She scored 52.7 points in total and secured a place in Indian Gymnastics Team for Gold Coast Commonwealth Games to be held in Queensland, Australia.
We had a chance to ask her about how she’s feeling after getting selected for the Games and what are her plans for the future.

IG – How are you feeling after getting selected for CWG?
MG – I am really really happy and at the same time excited!! The 2010 Delhi CWG was where I got inspired to take up rhythmic gymnastics as a profession and now after 8 years of hard work and training I am finally able to represent my country at these games.

IG- How is your training going leading up to the Commonwealth Games?
MG – The training from the past 8 months had been a lot different compared to how I was training all the years. More than the hours and intensity of the training we are now concentrating on the quality of it (trying to do my routines clean without any mistakes) this kind of training has been helping me in improving my execution and the smaller mistakes where it is easier to lose the points.

I believe that if a player has to perform it can not be just the player, there has to be a good team behind them and this team would definitely include a nutritionist, a physio, a psychologist and obviously the coach.

IG -How Participating at International level helps you to improve your Performance?
MG – The rules were recently changed after the 2016 Rio Olympics and this time we do not have to submit our difficult sheets so that would mean that the judges would give us points for only what they see and if they miss something we lose points for that. Which is why it is absolutely important for the judges to see us as often as possible so that they would know at least a little bit on what to expect. The other thing is that the feel and experience of a competition is different than training so it is important to attend as many competitions as possible to get these feelings under control or to get used to them.

IG – What do you think about how important the role of the other professionals are other than coach?
MG – I believe that if a player has to perform it can not be just the player, there has to be a good team behind them and this team would definitely include a nutritionist, a physio, a psychologist and obviously the coach.

IG – How much support you are getting?
MG – Up until the Delhi trials for 2018 CWG there was never any support financially. All the expenses for my training and competition were what my parents sent for (other than a few sponsorship from business individuals and the IFCI, that sponsored me for the preparation of Asian championship in 2016). But after my performance at the trials our Telangana state government has become aware of me and that I have a high chance of winning a medal. They are now sponsoring a new gymnova RG mat that would mean that I would now have a permanent place to train and this is definitely a step in the right direction.

IG – What you think is your chance for a Medal in this Commonwealth Games?
MG – What my coach and I myself am expecting from me is to give my best performance, to do clean, neat routines without any mistakes cause we know that if I do that and show my performance I will definitely get a medal and not just 1 but I have a chance to get 5 medals for our country.

IG – Where do you see Indian Rhythmic Gymnastics at world level now and in future?
MG – In the last couple of years India has always been last but for anything to become better it takes time and it is the same for RG In India. This year we moved a step forward and next year we will move another step forward so with the support and right training I am 100% sure that India can definitely be one of the top contenders in RG.

IG – What is your plan after commonwealth games?
MG – As I mentioned before I have always been working step by step so after CWG it is Asian games then the world championships this year and then next year to place in at least in the top 40 world rankings and finally to try and qualify for the Olympics.