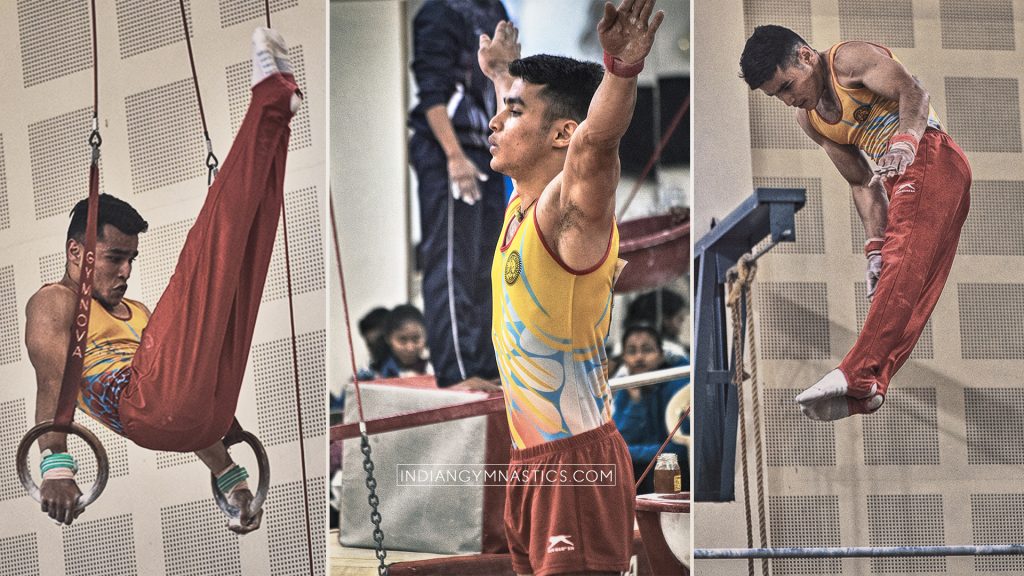 Yogeshwar started his gymnastics journey at the age of eight, training at the War Heroes Stadium in Ambala under the careful guidance of Sudershan Kaushal.

In his quest to better his gymnastics, and after looking at his friend Nikhil Bhatt excel under coach Praveen Sharma, who was an Indian Railways team coach and was coaching many international gymnasts at the Indira Gandhi Stadium in Delhi, Yogeshwar decided to train with Praveen Sharma, which allowed him to work on his technique and higher level, eventually leading him to a silver medal on vault at the National Games.

Soon after, Yogeshwar was offered to join the Indian Services team under the Army section by officials and has been training with them since 2015.

He has already represented India at three international competitions including the Commonwealth Games this year and the upcoming Asian Games will be his fourth.

We ask him about his preparation for the Games as well as his performances through this year.

IG: When was your first international competition? How was it?

YS: My first International competition was World School Games in 2013 which was in Brazil. This competition was a good learning experience for me. I watched gymnasts from other countries perform and it really helped me improve my own performance and understand it. At the time I was still training in Ambala. After coming back I used all that I watched and learnt from this competition to improve my gymnastics and I did.

As a senior my first International was the 2017 World Championship, Montreal.  I performed as an all rounder. It went well. I used this experience to improve further and in 2018 I got a chance to represent my country at the 2018 Commonwealth Games. I felt very proud and it was a dream come true for me. I had worked very hard for this.

IG: How was your experience at 2018 Commonwealth Games?

YS: In my opinion my performance was good. I came 14th in the All around finals and 10th on vault in qualifications.

In qualifications I performed two vaults, the first being the Handspring 1.5 twist and the second was the Round off 2.5 twist.  Unfortunately I touched my hand while landing the 2.5 twist on vault which cost me the 10th place. I think I don’t do enough training for that vault.

IG: How much difference you see in your performance  at the World School Games and 2018 CWG?

YS: It’s a huge difference. I was growing at that time. I didn’t have enough knowledge about gymnastics back then, about execution, training programs and recovery. Since I have learned that and Praveen Sir has helped me. I have improved tremendously. Training at the Army Centre is also good because of the environment, facility and the supportive teammates. 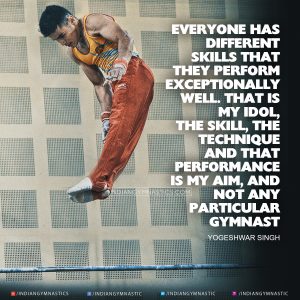 IG: How is your Asian Games preparation going?

YS: It’s going really well. I have improved my Floor difficulty from CWG 2018 slightly. I have added a double arabian half turn in my floor routine. My vaults are the same but I’m working on my landings and execution so this time I can rectify the CWG mistake. I will try to do my best.

YS: This is a huge learning experience for me. It helps me learn from the mistakes they have made and learn from them. They help me understand what to do in different situations, how to handle pressure, when to increase difficulty and when to cut it down. Rakesh Bhaiya’s fitness is very good and inspires me to improve my level and he always helps me better my gymnastics. Rakesh Patra, Ashish Kumar, Dipa Karmakar, Aruna Reddy these are the best gymnasts of our country. Training with them and watching them gives me motivation to make my country proud like they are doing.

IG: How you kept yourself motivated throughout these years?

YS: I  train to improve my gymnastics level to the international standard. I never thought of winning medals and getting in the team. I focus on improving my skills and that’s it. That’s what motivates me to keep working and get better each and every day.

IG: Who is your idol?

YS: I actually look up to people’s performance and techniques. Everyone has different skills that they perform exceptionally well. That is my idol, the skill, the technique and that performance is my aim, and not any particular gymnast.

IG: What is your future goal after the Asian Games?

YS: My very first goal is to better my Commonwealth Games performance and do my best at these Asian Games. Then, there is the World Championships. I haven’t thought about the Olympics yet but that’s definitely in the back of my mind.

IG: Great, It was nice talking to you. We wish you good luck for your competitions.